In this forthcoming book, "The Holy Place of Forgiveness," we have retained the dialogue that occurred in our weekly class sessions. By doing so, it gives you not only a window into the class session, but allows you to feel as though you are sitting right along with all the other participants (names of course changed) in the circle. At the end of each chapter, you will find daily exercises that were given to our students in the original class. These exercises, some journaling practices, some meditations, and some readings from ACIM, all help you to deepen your study and practice of the principles in A Course in Miracles. This book is focused on forgiveness and more so, self-forgiveness. We hope to have it released by mid-April and available at the ACIM Conference in New York City.

This is from Chapter 3: Crossing the River of Fear and Judgment

So what we then really get to (because the real false belief is that we think we’re separate from God), that’s where we really go. We’re special, right? What happens is we put the blame on everyone and everything outside of us, including our personality, our body, because we’re not really these personalities and bodies. It’s not the essence of who we are. It’s very subtle, just like you were saying before. The ego’s going to get in the front door, the side door, the window, the crack on the floor. It’s going to get in wherever it can to get us off the path of God. It doesn’t want us to be at peace.

A lot of times when we think about forgiveness, we’re thinking about major relationships, or it’s a bombshell that’s occurred in our life, these major things, but it could be as subtle as dropping a container of milk and calling ourselves: "Oh, you nut. Why did you do that?" It could be just judging when you’re watching the news, and you’re judging what’s going on. There’s a lot of stuff going on in the news right now, right? A lot to judge. It might be something about the current state of affairs. It might be talk around the water cooler. It could be the rude cashier. We don’t think about that. We instead just stay, "Oh God, she was horrible to me!" We tell our friends. It could be a robo-call, telemarketer kind of thing, or whatever pet peeve that you may have coming up. They’re all judgments. And utterly, the judgments, what are they? If it’s not love, it’s fear. Vigilance is the key.

So what we really have is that fear. Our true nature, and our brother’s true nature is love. But we protect ourselves by putting up the guard. I think you said (Rev. Deb to student) that a little while ago. We put up the wall. It is a wall against ourselves too, laying out the defense and ready to sound the horn for attack. We’re ready to go to battle. "The war against yourself is over," Jesus tells us. When we look at forgiveness, if we’re looking at somebody else, it’s really a forgiveness of ourselves. This is an illusion. While here, we’re just a reflection of what’s going on.

If you remember, in The Song of Prayer that we were reading, Jesus told us that forgiveness is always for ourselves. What we see in another is our own belief in our sins. There’s a line he says: You want to find those sins there and not in you. You want it to be in that other person. He says: Don’t make the error real. But we attach onto it anyway. We want to make it about this damn windshield wiper blade, right, or whatever it is that was going on. It gave you a good lesson anyway.

The first week, we did the “Eyes of Holiness” meditation, and we saw the holiness in ourselves and we saw our brothers without the sin and error that most of the time we’re bound to see. When we see the errors, whether it’s in ourselves or somebody else, we’re making them real. We perceive each error as another brick in the wall that we’re building against God’s love. Think about it that way. Every time you have a grievance, whether it’s about somebody else or yourself or a situation, an organization, whatever, it’s another brick in the wall of unforgiveness. So instead, let’s use those bricks to build the bridge. Let them be for forgiveness instead. Those are those what we like to call “FO”’s, the forgiveness opportunities. Let us build that bridge over the river of fear and judgment with the Holy Spirit, using all those situations and those grievances and those judgments in our life so we get to the other side where God takes the final step. It’s our choice. Do we want freedom or not?

Look for this book and our others at www.miraclesonebooks.org 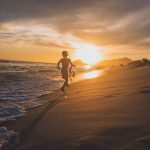 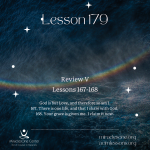